The objective of the Mississippi River South Bridge project is to build a new bridge to ease Capital Region traffic by providing additional cross-river transportation in the Greater Baton Rouge area. The project seeks to find the ideal, feasible location to maximize daily usage.

In 2021, the TomTom annual traffic index ranked the Baton Rouge Area as having the fourth-worst traffic congestion in the country, despite being the nation’s 66th largest metro area. According to TRIP, a nonprofit that researches economic and technical data on transportation issues, congested roads cost Baton Rouge Area drivers more than $1 billion collectively each year in lost time and wasted fuel.

The South Bridge Project is part of a transportation megaprojects investment across the state that includes MRB South, I-10 at Calcasieu Bridge, I-49 South, I-49 North, and I-12 on the Northshore.

In 2015, CRISIS performed a study of the most impactful traffic mitigation strategies in the Capital Region. The most impactful and highest benefit/cost projects were:
The new bridge and its connectors will essentially create a southern loop, allowing drivers to avoid current traffic choke points.

The Louisiana Department of Transportation and Development (DOTD) will narrow down the potential bridge crossings to two or three alternatives by May or June 2022 (click here to see the map of the 10 current alternatives), and enter the two-year federally-mandated environmental process, culminating in the Record of Decision in mid-2024. From then, considering a 5-7-year construction period, drivers could be crossing the Mississippi on a less-congested drive via a new South bridge as early as 2030 or 2031.

On May 27, the bridge alternatives were culled down from ten to three. The selected three alternatives were among the best on all measures, and specifically when considering the projected reduction in area-wide Vehicle Hours Traveled (or “traffic”). Each of these locations demonstrate decreased traffic, in terms of hours traveled in 2042 traffic modeling. 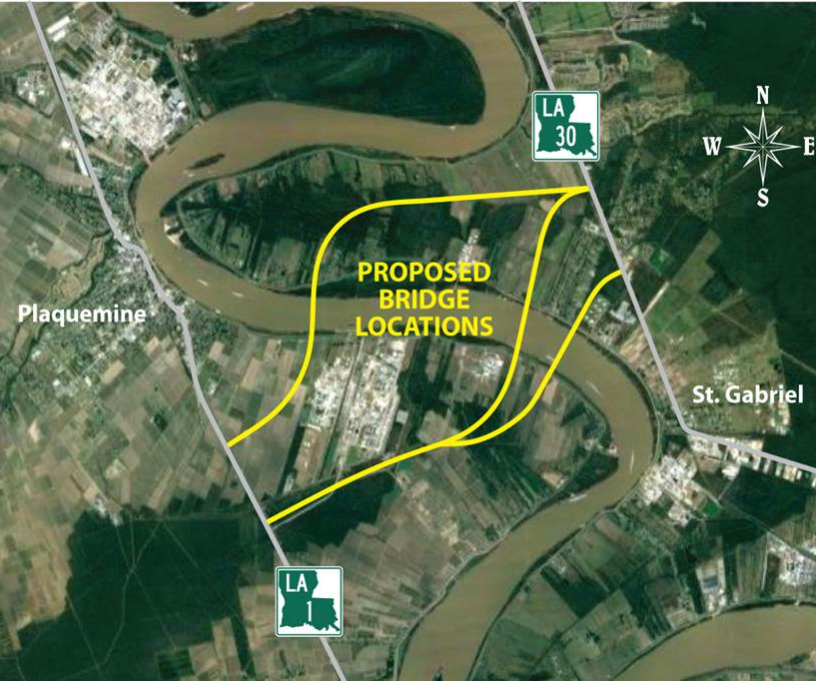 The bridge will connect a new route across the Mississippi River, from I-10 to I-10 via connector routes. On the west side of the river, LA 1 will serve as a connection to the new bridge, which will then link to LA 30 on the east side of the river. The project, however, ultimately goes far beyond simply bridging LA 1 and LA 30. The route creates a traffic-easing southern loop that bypasses the Baton Rouge city core and the bottleneck on the current bridge, connecting drivers directly to I-10 on the east and west sides of the river.

Both LA 30 and LA 1 are slated for capacity enhancements to facilitate greater traffic flow. DOTD is currently working through the environmental process so that both can be designed and funded in tandem. While much of the attention is on the bridge and its pre-approval process, importantly, work continues apace for upgrading these two connecting corridors concurrently.

THE COSTS AND FUNDING

DOTD projects the new bridge’s construction costs to total around $1.5 billion. The contemplated financing stack entails a combination of one-time state, IIJA competitive federal grant funding, a portion of state vehicle sales tax, and tolls – as a part of a public-private partnership (P3) – to finance the construction.

Notably, the legislature approved a $300 million budget allocation of one-time funds for the bridge. Transportation officials expect these funds to accelerate the project timeline by attracting private partners and providing matching funds for IIJA competitive grants.

P3s are government partnerships with the private sector to share both the risks and rewards of providing public infrastructure. The private partner designs, builds, and usually operates and maintains the highway according to the government’s requirements, deriving long-term revenue via tolls paid by drivers.

Déjà vu: or, haven’t we been here before?

In past years, there have been substantive conversations regarding I-10 bypasses, loops, and other traffic mitigation-oriented projects, but with minimal tangible results. This new bridge project is better positioned than prior efforts because of the glut of one-time funds, the potential for federal infrastructure matching grants, and a seemingly increased appetite for progress among leaders and lawmakers.

The Baton Rouge Area finally has a real chance to address long-time traffic congestion issues and the financial mechanisms to make it happen. We must get it right in the 2022 legislative session and throughout the remainder of the process for the good of the region and the State of Louisiana. The future of the competitiveness of the Capital Region depends upon it.