Joining a US Chamber of Commerce delegation this past month, I had the unique opportunity to embark on a trip to Israel. The trip’s purpose was to build ties for greater commerce and expose more American business networks to Israel’s culture, history, security and business climate. During our trip, the delegation found Israel’s business and industrial culture to be characterized by innovation and direct problem solving.

Learn more about the trip and how Israel’s business climate compares to Louisiana’s below.

Today, Israel’s economy consistently grows at 3.5 percent per year, while its population grows at 2 percent per year, according to the Manufacturers’ Association of Israel. Incredibly, there are 94 companies from Israel listed on the NASDAQ, placing the tiny country in third, behind the U.S. and China, for the most publicly listed companies, according to Tal Harmelin, a director at Start-Up Nation Central. The aggregate market cap of these companies is $70 billion.

They are seeking to grow and attract business investment that grows jobs that will grow exports. For local businesses, there are opportunities for exporting services or producing goods in Israel, and local commercial partners on the ground to assist. In addition, there are 350 R&D centers in Israel. Many U.S. companies are taking advantage of Israel’s research and development brain power. The U.S. also represents an important market for growth, as their large companies exist in a country of only 8.5 million people.

One significant opportunity for Louisiana may be in building relationships with Israel’s startup community. The “startup nation,” as it’s known, has 6,000 startups, which calculates roughly to 1,600 people for every startup. It is said that Israel offers the highest rate of startups per capita in the world. The country attracted $4.68 billion in venture capital funding in 2016, or about $565 per capita. Through a non-profit called Start-Up Nation Central, one can identify and connect with startup partners by industry sector, including Agricultural Tech, Water Tech, Cybersecurity, or Industry 4.0 (digital manufacturing).

With 100 venture capital firms, 22 incubators, 78 accelerators, nine universities, 16 technology transfer offices, and hundreds of corporate research and development centers, Israel has a huge and vibrant innovation ecosystem that would be the envy of most countries. Because the country has only eight million people, their innovations and startup companies must seek other markets to achieve scale.

Water plays an important role in both Israel and Louisiana. In Israel, there is a high priority on securing access to water sources, while in Louisiana, the priority is placed on protection and restoration of coastal areas, as well as sustainable access.  A large part of Israel’s efforts to secure access to water is through recapturing of its water. The nation recaptures water at a rate of 80 percent, while the second highest country, Spain, recaptures only 20 percent. And even with the huge percentage of recapture, 75 percent of Israel’s water comes from desalination, which is the extraction of mineral components from saline water.

Through Israel’s bold leadership stance of radical reduction on water consumption and creative production of new water sources, the nation has become a net exporter of water to some of its neighboring countries. Future partnerships could help advance water research in both Louisiana and Israel and strengthen economic opportunities for water technologies. Delegates from the Baton Rouge-based Water Campus participated in the trip to leverage potential partnerships in the sector.

While it’s perhaps not an obvious business, commercial or trade partner, Israel is a fascinating country that presents Baton Rouge and Louisiana with business, innovation, and research opportunities worth further exploration. 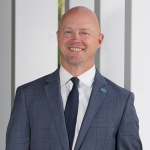 Adam Knapp is president and CEO of the Baton Rouge Area Chamber. Knapp oversees all activities at BRAC and guides the strategic vision for the organization.