East Baton Rouge Parish has never had an ongoing system of drainage maintenance. This fact, unbeknownst to, and surprising to many, has played a significant part in the drainage and flooding issues in the Capital Region.

This spring, Mayor Sharon Weston Broome announced that the City-Parish would dedicate nearly $20 million of one-time federal American Rescue Plan (ARP) funds to address some of the most urgent, backlogged drainage work. Today, the Metro Council will consider a proposal that aims to create a dedicated revenue stream to fund an ongoing system of drainage maintenance that would utilize existing tax revenue to cover the costs.

The Proposal to Shift Funds

The councilman’s original proposal calls for one millage point to be shifted from the Library System, around $4.6 million or 9% of the library’s annual revenues, and a quarter of a millage point from MARC, accounting for about $1.2 million. The combined $5.8 million would be dedicated to drainage maintenance beginning in 2023.

While the Baton Rouge Area Chamber supports funding ongoing drainage maintenance without imposing new taxes, we do so only to the degree that the rededication of revenue does not have an adverse effect on any agency involved. BRAC’s analysis shows that a rededication of 1 mill of property tax revenue from the Library System would be injurious to the system’s operations, deplete the system’s cash balance, and jeopardize voter-approved capital improvements.

The financial projections below show a 1 mill property tax reduction from the Library System with millage rollbacks at each four-year assessment period during the millage cycle. Millage rollback/roll-forward decisions are solely at the discretion of the Metro Council, so only rollbacks are shown in the projections for the purposes of cautious and prudent budgeting.

Under this scenario, beginning in 2023 and for the remainder of the millage cycle, the Library System would be forced into significant operational cuts because of budget deficits.

*Note, most year-over-year reductions in the Cash Balance are due to capital improvement projects.

There are, however, feasible compromise scenarios within which the Library System could redirect less than 1 mill of property tax revenue without drastic financial shortfalls or putting capital improvement projects at risk. The following graphic, for instance, shows a reduction of 0.3 of a millage point with the same two millage rollbacks as the prior chart. A rededication of 0.3 of a millage point might conceivably be the largest reduction that the system could withstand without near-term deficits, and, according to library officials, without broad cutbacks to its basic operations, staffing, and programming.

It is also important to note that even in this scenario, the cash balance is reduced by more than half by the end of the millage cycle, affecting the planning for future capital improvements.

*Note, most year-over-year reductions in the Cash Balance are due to capital improvement projects.

Considering the crucial role that libraries play in supporting literacy and education, creating learning opportunities, offering digital tools and devices, and providing community gathering spaces, we would be remiss to hamstring the ability of our Library System to continue to deliver upon its mission with excellence. The system has served our community well and with financial prudence through the years and will continue to play a vital role in elevating the quality of place in the Baton Rouge Area.

BRAC does support the concept of a responsible rededication of resources to fund drainage maintenance, but only at a dollar figure that is workable for the agencies involved. We encourage the Metro Council and Library System to determine a feasible millage reduction that can be agreed upon amicably, and we urge the City-Parish to create a sound, fiscally responsible plan to incorporate this new funding to address ongoing maintenance of drainage.

In a special board meeting on Tuesday, July 27, the Library Board of Control unanimously approved a resolution that opposes any significant reduction of the library’s millage. The resolution, “Regarding the Preservation of the Integrity of the Dedicated Funding Millage System,” expresses the Board’s pushback against a potential 1 mill tax revenue reduction and the process of the millage rededication proposition, noting that other alternatives – including spreading smaller cuts across a larger number of agencies – were not considered.

If the Metro Council approves the proposal or some compromise version of it, the measure will go before the voters for approval this fall. 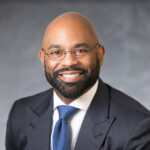 As the senior vice president of policy, Trey drives regional and state-level initiatives to create a more competitive region for business growth and talent development, particularly through the organization’s public policy and government affairs activity.